Here is a good news for those who have been waiting for the Stable Build of the dotOS ROM for Lenovo Vibe K5 plus. The dotOS Team has just released the first big installment of the dotOS 2.5 ROM (Stable) Builds for Vibe K5 Plus.

The Vibe K5 Plus comes with a 5-inch Full-HD IPS display with a 1080×1920 pixels resolution. The phone is powered by a 1.5GHz octa-core Qualcomm Snapdragon 616 processor and supports expandable storage.

The Android open source world is full of surprises like these. The tenacious rapid development of latest OS versions on earlier devices like the Lenovo Vibe K5 Plus is definitely worth applause. Such devices might have been long forgotten by the OEM to update and support them. But the truth is, we don’t need them to update when we have such a supporting development community like XDA-Developers.

Every ROM developer tries to make the best ROM with lots of features, but only a few are successful in their attempt to make a good ROM that makes your device work more powerfully, run smoother, faster and deliver best battery performance possible. In fact, the most concerning thing with a device with a large display like the Lenovo Vibe K5 Plus is battery life. In the race of making world’s largest and slimmest phones, the manufacturers often compromise with the battery performance of their products. 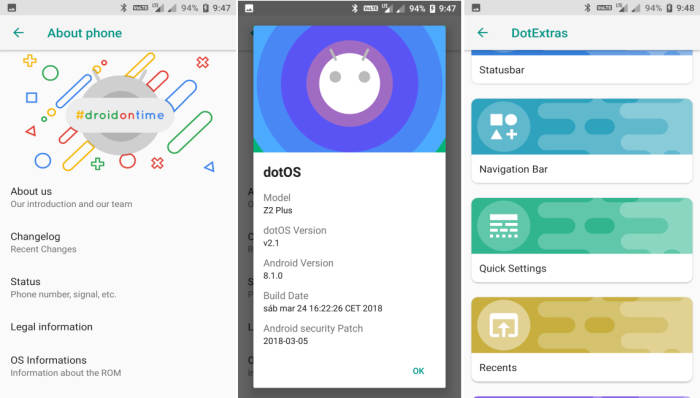 The dotOS custom firmware is based solely on Android Open Source Project (AOSP) with a few imported codes from LineageOS, Pure Nexus, Resurrection Remix. Our community has always encouraged the incoming of new people and new ideas, so we would thank Team “dotOS” for contributing their time and knowledge towards the Android system.

Voila! You now have Oreo 8.1.0 on your Lenovo Vibe K5 Plus, it feels proud to hear that, doesn’t it?

Are you stuck anywhere in mid? Comment it out and we will provide an helping hand for sure.